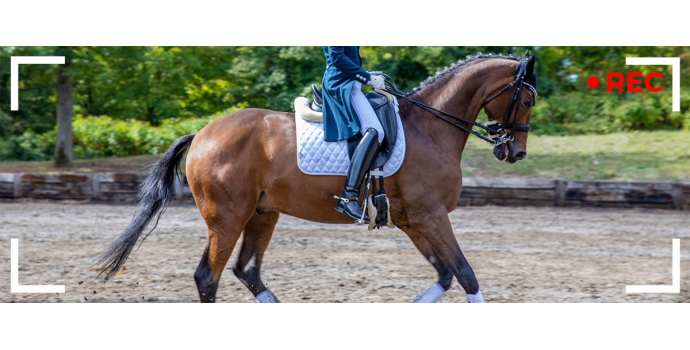 The top ten most viewed horse dressage videos on youtube

It’s always interesting and incredible to see the high number of views that a video can get on YouTube. PIXIO robot being used by many riders around the world, we decided to take have a look at the most horse dressage viewed videos on YouTube and see what kind of videos make the riders’ heart sing. So whether you’re into dressage or not, have a look at these pretty cool videos

https://www.youtube.com/watch?v=zKQgTiqhPbw
Taking first step on the podium is Andreas Helgstrand with his freestyle final test during the 2006 WEG in Germany. This 6 minutes long video counts more than 19M of views in 10 years! With his nine years old mare Blue Hors Matiné, Andreas Helgstrand received the silver medal for this amazing and dynamic performance on a Lady Marmalade medley with a final result of 81,500.

https://www.youtube.com/watch?v=knCj92zA0tU
Look who is also on the second step of the podium! Andreas Helgstrand and his mare Blue Horse Matiné are stealing the show once more with almost 6 millions of views for the 2006 WEG on a special performance! The rider stands out because of his music choice once again and this time, it’s with an hip hop song that Andreas Helgstrand has chosen for his dressage test. It’s pretty amazing how they are matching the music rhythm making it look as if Blue Matine was literally dancing! For the amount of work behind this successful passage, the video deserves its 6M views!

https://www.youtube.com/watch?v=MPJGEzI3aIc
Still at the 2006 WEG but with another rider this time! That’s almost 3 millions views for Anky Van Grunsven and Keltec Salinero. Both commentators agree to say that watching this test is absolutely relaxing and fascinating! The music choice is great and you can feel that Keltec Salinero is perfectly on the beat for each step! For this performance, Anky Van Grunsven will get the well-deserved gold medal with a final result of 86.100.

https://www.youtube.com/watch?v=DcDLLxgWa_Y
Let’s fast forward a few years with this 2.3 millions views dressage video! Charlotte Dujardin is performing for her Freestyle test for the London 2014 FEI World Cup with her horse Valegro. Not only this video shows an amazing and talented dressage performance but it also demonstrates the new record in freestyle dressage making Charlotte Dujardin the world champion in this category.

https://www.youtube.com/watch?v=GT6Yn7SLkmQ
With such an appealing title, no wonder why this video has already more than 2M views J! This dressage performance was filmed during the 2009 World Dressage Masters Grand Prix Freestyle in England. Edward Gal is riding Moorlands Totilas and together they achieve a great performance. The high quality of this test done thanks to a good communication between the rider and his horse is fantastic. So good, that they actually beat the world record and confirmed that Moorlands Totilas was one of the most talented horse of modern time.

6 – Dressage horse freaks out at the London 2012 olympics

https://www.youtube.com/watch?v=TBUSt8hPwio
Sick of world champions and perfect performances? Here you go! The next video has reached 1.5M views in 6 years! The rider David Marcus is about to start his dressage performance but his horse Capital get scared during the test. This ends in a pretty bad performance that some spectators explained by a heavy downpour of rain, followed by journalists covering their cameras, public opening umbrellas and of course screaming because of the horse performance. All in all, the horse got scared by the noise and movements and did not do well on this performance. Unfortunately this caused David Marcus to be eliminated from the competition.

https://www.youtube.com/watch?v=62aDZKNgb8s
Another great video published in 2014 which has been viewed more than 1.1m times! In this video, you can see rider Lauren Barwich during her dressage performance in Georgia. According to the FEI, rider Lauren Barwick has been ranked as number one para-equestrian rider. This performance was filmed during a stop in the “Future of horsemanship tour” which was a bunch of events taking place in the US in order to gather people around the subject of horses’ well-being. And this amazing video proves that Lauren masters the communication with her horse and has a breathtaking relationship between both.

https://www.youtube.com/watch?v=tFMmr0KjrXQ
Back to competition in this Grand Prix Freestyle dressage performance from the 2009 Las Vegas World Cup with 1.2M views! Rider Hans Peter Minderhoud dedicated a lovely performance to his mare Exquis Nadine. The rider said he chose a light and charming music in order to emphasize his mare’s personality and way of moving. This ends up in a delicate, elegant and amazing test by both performers.

https://www.youtube.com/watch?v=2n0ag4qmG5g
Another appealing video which has reached the million views in 7 years! This video was posted by a dressage coach and shows that sometimes the lesson can also be for the rider J No need to say that the comments sections of this video (almost 1000!) has become a forum for debate on wheter the horse or the rider are being wrong… What would you say?

https://www.youtube.com/watch?v=cDKWnCNpmQA
Last but not least video is Charlotte Dujardin’s performance with Valegro. What makes this video special is that it’s Valegro’s last performance ever before being retired. Charlotte Dujardin and Valegro have earned many golden medals and broke three records in dressage together and this video is very emotional which explains the 1M views in only 2 years!

So many videos and so much views for these 10 videos from happy to funny and emotional performances! Let us know which one is your favorite in the comment sections below! Ours is probably the hip hop one! And who knows, you might be the next person to publish the most seen dressage video on YouTube in the upcoming years! So what are you waiting for?

Psst… here’s a good tip to start: get a PIXIO/PIXEM and make sure to publish the greatest video!