The power of videos as an accelerator of progress in sports

Looking at some concrete examples, it appears that combining sports and videos can help in terms of progress. Indeed, not only videos can accelerate the speed of the progress but sometimes it also goes hand in hand with an advancement of the teaching methodology.

We decided to illustrate these ideas through different sports (skydiving, horse riding and surfing) for several reasons :

- Skydiving is probably the sport which has the most advanced use of videos,

- Horse Riding implies a particular relationship between the horse and the rider. It is also an old sport practiced since ancient ties. Thus, the teaching methodologies in this discipline are extremely advanced,

- Surf is a quite recent sport and is maybe not yet regulated like other sports in terms of educational methods, so surfers are enthusiast for developing new teaching techniques.

Consumer video cameras are pretty new since they appeared during the 70s. It is only with the development of digital cameras around 1995 that their use has become commonplace for different purposes: progressing in sports, communicating, creating memories…and elaborating new teaching methodologies as well!

The incredible case of skydiving 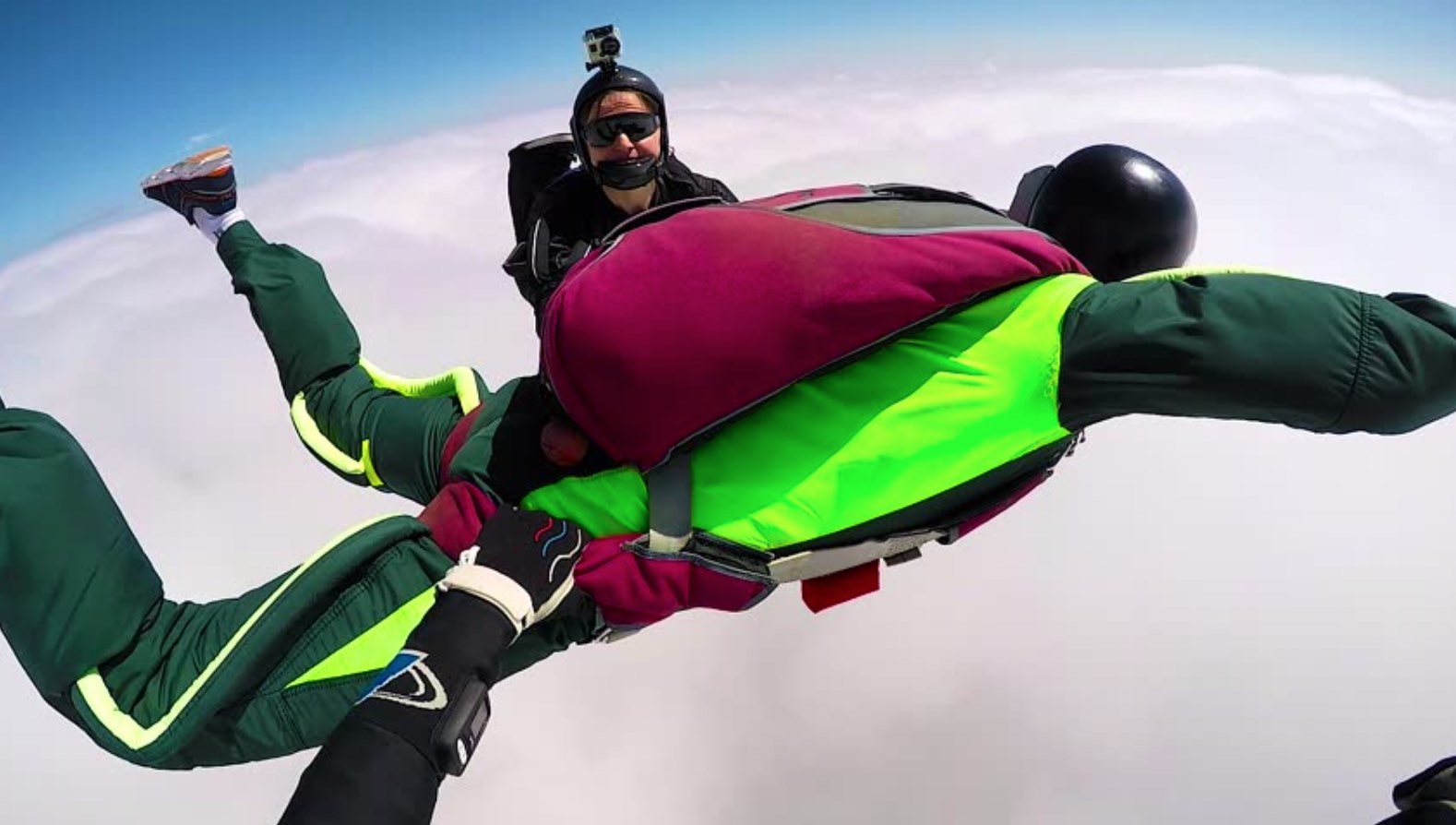 A. Before the 90’s, the instructors used to ask their students to do around a dozen of static line jumps from an airplane. It was only 3 seconds of freefall each time. The parachute was extracted automatically by a strap between the plane and the parachute. At the beginning of the 90s, skydiving instructors started to freefall jump with their students during about 1 minute, and filmed them. Two or three years later, all the skydiving schools gave up this method in favor of free flying combined with filming. Once on the ground, instructors take a lot of time to analyze the videos with the students and prepare them for their next jumps. Thanks to the footages, they can tell what went wrong and how they can improve themselves. Video is now used for beginners who can now learn in 10 jumps (equivalent to a one-week internship) what they would have learned in 50 jumps without video (almost one year!).

B. Most of the skydiving disciplines have videos to debrief the training sessions. This is the case for what is called “Relative Work” and many others. During a training or a competition, a team will never jump without having a cameraman above them. This way, they can watch their jump and analyze what they need to do next to improve.

C. Some subcategories also use video as a “judge” during competition. The cameraman jumps with the team and shares the footage with the judges as soon as he lands. The cameraman is therefore a real member of the team given that a bad framing can penalize the entire team.

D. Another discipline called “Free Style” also awards the artistic level of the shooting. This time, the cameraman is also a performer!

Through these four axes, we understand that skydiving is one of the sports which use videos the most. Some other sports may learn from it.

The “high-tech” case of horse riding

While riders often feel that riding is an outdated area, we have noticed that this field is on the cutting edge of teaching methodologies and technologies, especially concerning videos.

What makes horse riding special is that both the rider and the horse need to be trained. There is a special link between them while riding, and this relationship needs to be created through particular educational methods. Every riding stable has its own way to work but the method is always well-thought-out. This is probably explained by the fact that horses are complex beings and each of them needs a perpetual adjusted method. As you understand, riding is not only about training and progress but teaching takes a lot of place also. This is why technical advancements can improve this discipline. Indeed, we noticed that riding already uses videos in different areas:

A. A lot of riders and their instructors use videos for coaching session. For instance thanks to a Smartphone or a tablet that they use to film and to analyze during the ride or after. The issue encountered by the coaches is that it is hard to film and pay attention at the same time. Because of the average quality of the video, they often miss details and cannot properly advise their trainees. Also, this lack of video quality combined with an insufficient knowledge in shooting prevents the riders/coach from using the footage for communication purpose.

B. The solution for instructors to avoid being too focused on filming rather than on the training itself is to use cameraman robot. The rider wears a watch connected to the robot which zooms and follows the rider’s movements. Thank to this method, the instructor can analyze his trainee session both through his own eye and thanks to the video. Riders often need a tight zoom to watch carefully all details, and they also often need a technology that can work indoor with a range of about the size of the arena, which requires cutting edge technologies that cannot be found easily.

C. During a competition, it is easier for riders to have either a groom, a coach or a friend who can film as there is no need for live coaching.

D. A rider can also use video for live coaching session with his coach if the latter cannot be at the same place (for instance : in another country). Through this live session, the instructor can interact with the horseman either through a headset or speakers. They will need to use programs such as Skype, Facetime… rather than the usual streaming services due to their 15-60 seconds delays timeout.

E. Some riding schools have started to use automatic videos transmitted with a slight delay during the whole day so that the rider and his coach can analyze an exercise right after its end.

Surfing is a particular but interesting example: indeed, it is a quite recent sport such as skydiving in which videos are used for teaching methods like it is the case in many other disciplines. The main difference is that this usage is less widespread and the changeover is way longer than it is in skydiving.

The main beneficiaries are the trainees who actually use it for competition purpose. It is easy to understand why surfing is a particular case. There are many drawbacks preventing videos from being as present as it is in skydiving:

- The environment does not allow surfers to use sensitive materiel due to the risk with water, sand…

- The difficulty for one person to set up the shooting by his/herself,

- The question of security when working with beginners who represents the majority of trainees,

- A lot of professional surfers usually train on their own, and don’t actually have enough budgets to employ their own cameraman.

It is for these reasons that cameraman robots have emerged in this discipline as well. Again, it has also contributed to the development of teaching methodologies. Indeed, instructors can now go into the water with their trainees and ride a dozen of waves instead of only three when alone and without filming. The video is then used on the shore to debrief and analyze the sequence. Even though filming is not used a lot with beginners at the moment, these methods might spread over time. Technologies can rely on GPS positioning which works only outdoors, and must have a powerful radio link between the surfer and the camera in order to overcome the strong signal absorption by water. For this reason, 900MHz is preferred rather than 2.4GHz for watersports.

Not only video implies a filming method but it also embraces the question of how to make the best use of the footage. The answers are numerous so the list below is not exhaustive.  It’s amazing to see how video has really modified the teaching methods.

A. The easiest and most known teaching method with video could be compared to a standard coaching session. Except that instead of doing it live, the trainee and his instructor analyzes the sequence later. One of the advantages is that it is easier to discuss, to see the sequences several times and it is also more obvious for the rider to understand his instructor’s comments about his position and gestures as he can see himself. Plus, it is clearer to understand the external environment such as the attitude of the horse or the vision of the wave.

B. Live coaching sessions (with the coach in another country) are more and more widespread. It does not add up many things regarding teaching methods but it is more a budget question as it prevents the coach/trainee to move around. It may increase the number of lessons, which is very positive.

C. Probably the most advanced teaching methods with video have the following steps:

- Debriefing without video with the trainee. The instructor asks his student to draw on his memories and feelings. The coach only speaks to encourage the trainee to develop his speech,

- Watching the video without making any comments,

- The trainee comments the video but the coach does not speak,

- The coach starts to question the trainee about the aspects he would like to concentrate on. They also deal with details that might have been missed or misinterpreted by the trainee and the instructor also takes the opportunity to include new notions.

- Preparation for the next exercise with the instructor with his remarks regarding the screening.

These steps are made for the trainee to develop his proprioception and method. The difference in terms of speed of the progress between working with or without video is amazing. Once you have trained or worked with video, there is no way you can go backwards!

One might be tempted to conclude this article by saying that the most expensive sports are the ones which use the more videos and are more focused on developing teaching methods because trainees are willing to have rapid results.

We disprove this point of view since many other less expensive sports still look for progress through teaching methods such as dance, skate, golf and gymnastic for instance. It is also the case for most of the collective sports and many other disciplines! What is certain is that there are so many advantages in combining sports and videos that once you’ve tried it, you will surely not back off. Please, feel free to share your experiences related with sports education and to what extent video can push forward your discipline!