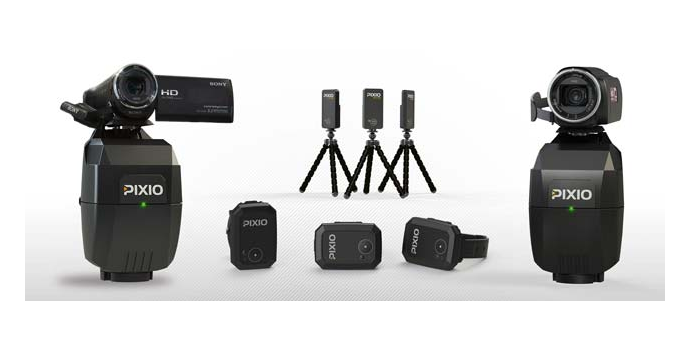 Making the most of MULTI USER mode

Thanks to PIXIO, not only you have the opportunity to be filmed automatically but it is also possible to automatically film several persons from different angles!

How to do so? It’s really simple. The first thing you need is to get a full PIXIO system including the PIXIO robot, a watch and three beacons.
Then if you need to film from different angles, you just need to get an extra robot. If you wish to film several persons, then you will have to get extra watches (one for each person you want to film). The great thing is that no matter the number of robots or watches, you will always need only 3 beacons.

So here you are. You just received your PIXIO, extra robot and/or extra watch.

STEP 1: PAIRING YOUR DEVICES TO THE MASTER ROBOT

The whole procedure takes 3-5 minutes and you will need to do it only once and it will be saved for future uses. If you do purchase another watch and robot later on, you will only have to pair this last device to the robot and that’s it!

I HAVE SEVERAL WATCHES TO FILM DIFFERENT PEOPLE

Another solution is to use our app to select which watch you want to be tracked.

I HAVE SEVERAL ROBOTS TO FILM FROM DIFFERENT ANGLES

To film from different angles, all you have to do is to set up your PIXIO with all the devices: robots, beacons and watch(es). When you launch the tracking, the robots will automatically detects the watch and track it.

You can use up to 16 robots. Just keep in mind that a maximum of three watches can be filmed by the 16 robots at the same time so you will need to switch from three watch to three others and several robots will film the same watch sometimes.

I HAVE SEVERAL ROBOTS AND SEVERALS WATCHES

If you want to film different people using different watches and robots, you will have to use our our free app “PIXIO remote”. This will enable you to decide which robots need to track which watches. Just pair your master robot to the app and you will have access to the list of all paired robots, watches and 3 beacons.